Posted at 16:52h in newsletter archive by dkf

We wish all of you a belated Happy Passover and Happy Easter!

To celebrate quietly at home, we offer an edited history of the Faberge Easter Eggs.

The famous series of 50 Imperial Easter eggs was created for the Russian Imperial Family between 1885 and 1916, when the company was run by Peter Carl Faberge.

These eggs were the ultimate creations and achievements of the House of Faberge and are inextricably linked to the fabulous reign of the Romanovs as well as to their demise.

The first of the series was made in 1885 when Alexander III commissioned an Easter gift for his wife Maria Feodorovna. Initially the egg was planned to contain in its hidden “yolk” a diamond ring, but the final version contained an important ruby pendant. The eggs became more elaborate each year and each contained ingenious secret mechanisms and surprises.

Malcolm Forbes became the largest private Collector in the world. His heirs engaged Sotheby’s to auction off his large collection, but in a private pre-sale Victor Vekselberg acquired the whole collection and returned it to Russia. 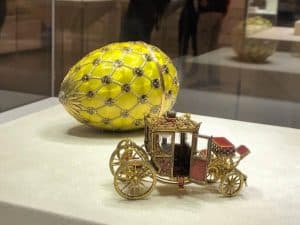 The Coronation Coach Egg (1897)
Yellow enamel gold egg with applied trellis pattern and double headed eagles in black enamel. The exact replica of the real Coronation coach. The egg’s surface is dotted with motifs from the Tsarinas coronation robe. It took 15 months, 16 hours a day to produce. Originally an emerald egg pendant was hidden inside. (Forbes Collection) 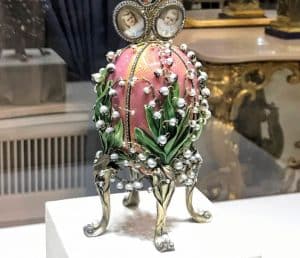 Lilies of the Valley Egg (1898)
The pink guilloche enamel Art Nouveau egg is literally dripping with pearl and diamond set lilies of the Valley, the Empress Alexandra Feodorovnas favorite flower. The four cabriolet feet are entwined with foliage set with diamonds. Hidden inside are three miniatures of the Empresses eldest daughters. These appear when one of the pearls is twisted. (Forbes Collection) 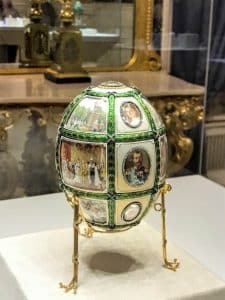 The Fifteenth Anniversary Egg (1911)
Given by Nicholas II to Alexandra Feodorovna, this was an Easter gift and part of a standing order of two Faberge eggs each Easter, one for the Tsars Mother and one for his wife. The Bay Tree Egg was given the same year to the Dowager Empress. Made of gold, white and green enamel, this egg is decorated with diamonds and rock crystal and divided into eighteen panels set with 16 miniatures. The design commemorates the 15th anniversary of the Coronation of Nicholas II. Inexplicably, no hidden treasure was made for this egg. (Forbes Collection) 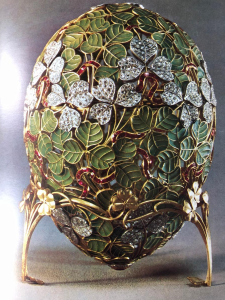 The Clover Egg (1902)
Another gift from Nicholas II to his wife. This is one of the few Faberge eggs that have never left Russia. Formed of stems and leaves of clover in the shape of an egg, made of chased gold and green plique a jour enamel; some are set with rose diamonds and decorated with rubies. The surprise in the egg has been lost but the archives reveal that it was a four leaved clover with twenty three diamonds and four miniature portraits of four of the Tsars daughters. (Kremlin Armoury) 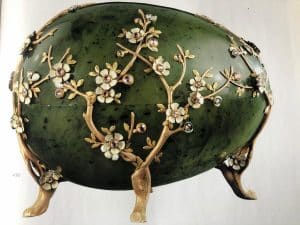 The Apple Blossom Egg
The immensely wealthy Barbara Kelch (of a Russian Industrialist Family) was the recipient of seven Faberge eggs between 1898 and 1904. The Kelch eggs are a bit larger and of equal craftsmanship to their Imperial counterparts. All seven were sold when Barbara Kelch emigrated to Paris and ended up in America. This one is a base of nephrite which opens horizontally and features gold feet which are apple tree trunks. The branches are pink gold leaves and the apple blossoms are white enamel with pink foiled rose cut diamond centers. (Adulf Peter Goop Collection)