Posted at 15:37h in newsletter archive by dkf

Shells and marine life became a fascination throughout the 30’s, 40’s and 50’s and were a popular motif in jewelry after the severe war years of WWI and WWII. People wanted to once again regard beaches and sea life as relaxing and beautiful rather than a place to land troops and do battle.

Designers like Suzanne Belperron and Verdura were eager to break from wartime constraints and used unusual and fanciful materials to render these marine forms.

In 1933 Vogue magazine called shells “the new jewel… (they are) eternal”.

Fulco di Verdura spent his childhood summers at the seashore in Sicily and the shells he saw there inspired him throughout his career. 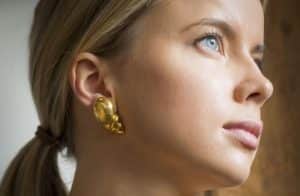 Suzanne Belperron was also fascinated with marine life, unlike other jewelers who were depicting birds, cats, and dogs. Like her iconic starfish brooches, these “coquillage” or shell earrings were personal favorites of hers and are emblematic of her evolving sculptural style. These are from the fifties and were designed for Herz-Belperron. As she neared retirement, Thomas Hoving (of Tiffany) tried to hire her and to buy her archives. The archives are owned today by the Landrigan family who beautifully reproduce these early designs; this pair are the originals and are available for sale along with a Certificate of Authenticity. 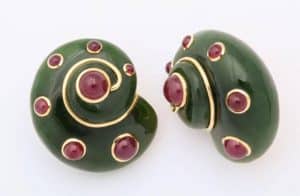 Verdura not only used shells in his jewelry design but featured three of them in his crest.

He used natural and embellished shells in brooches, earrings and objets de vertu to great effect.

His sources for these shells ranged from the beaches of Newport and Fire Island to the gift shop at the Museum of Natural history.

His shell jewelry became instantly collectible; each piece was unique and inimitable. A famous photo of Paulette Goddard (by Horst)in Vogue magazine in 1941 shows her wearing a Verdura orange shell brooch encrusted with a lions paw. 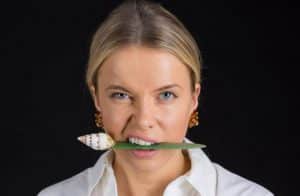