Wood She … Wood She Not | dkf
2750
post-template-default,single,single-post,postid-2750,single-format-standard,theme-bridge,bridge-core-1.0.4,woocommerce-no-js,ajax_updown_fade,page_not_loaded,,qode-title-hidden,qode_grid_1300,side_menu_slide_from_right,columns-3,qode-child-theme-ver-1.0.0,qode-theme-ver-21.2,qode-theme-bridge,qode_header_in_grid,wpb-js-composer js-comp-ver-6.2.0,vc_responsive

Posted at 15:19h in newsletter archive by dkf 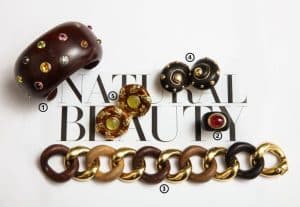 After the stock market crash in 1929, Seaman Schepps lost everything including his (then) newly built shop at 1066 6th Avenue (around the corner from the Algonquin). Jewelers like Schepps and Fulco di Verdura had to re-think the way they did business and the way they designed. This led to developing exclusive designs, mixing unique ideas, bold colors, and novel textures. In 1934, Schepps opened a shop on Madison Avenue and became known as the most innovative American jeweler of that era. While on a trip around the world, Seaman Schepps was so enamored with Hong Kong that he delayed the rest of his tour to stay for three months.

There he discovered unlimited resources which could be adapted to extraordinary jewelry creations. From rough branch coral to elegantly carved ivory chess pieces to inlaid wood, Schepps was inspired by all that was new and unexpected.

In the late 40s, the large, luscious pieces Schepps created were the natural complement to post-war fashions.

Schepps blended the unexpected; combining diamonds, precious metals, and man-made materials, choosing his media to create a vivid palette of tone and hue.

Schepps pioneered a unique style of jewelry whose sense of splendor offered a new perspective to the world of fine jewelry.

Clients wanted one-of-a-kind creations and commissioned Schepps to incorporate their old jewelry into fresh new designs one of which was the “turbo shell” earring (made by Verdura as well and shown here), which led to novel decisions that helped distinguish Schepps and Verdura as an extraordinary talents.

Their client lists included FDR, the Duchess of Windsor, and members of the Du Pont, Mellon and Rockefeller families.

The Verdura, Schepps and Elizabeth Gage pieces we feature in this mailing are highly collectible and wearable now… and forever.