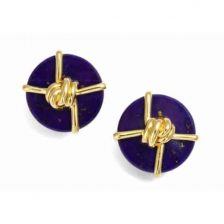 Aldo Cipullo joined Cartier, New York in 1969 after an apprenticeship in his native Italy, and later at David Webb. His gem-set jewelry is influenced by medieval goldsmith’s work with its use of polished stones set into gold mountings. He is best known for his modern interpretations of historical artifacts such as the two-piece “Love Bracelet” that had to be bolted together around the wrist with the aid of a screwdriver which was sold along with the bracelet.

cipullo pieces from the collection