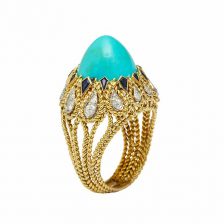 Pierre Sterlé was born in 1905 into a family of financiers. After his father’s death during World War I, he was placed under the guardianship of his uncle, a jeweler, who taught him the rudiments of the trade. In 1934, he established his own business in the rue Sainte-Anne in Paris, moving in 1945 to an upstairs location at 43, avenue de l’Opera. From 1934-39, he created jewelry for other houses such as Boucheron, Chaumet, Ostertag, and Puiforcat. Although the ideas and concepts for all jewelry offered through his salon were Sterlé’s, he engaged the services of draughtstmen such as Jacques Desnoues and, after 1960, Yves Poussielgues, to carry out the designs. The firm remained open until 1976 when Chaumet bought the stock and also hired Pierre Sterlé as an artistic advisor.

sterlé pieces from the collection